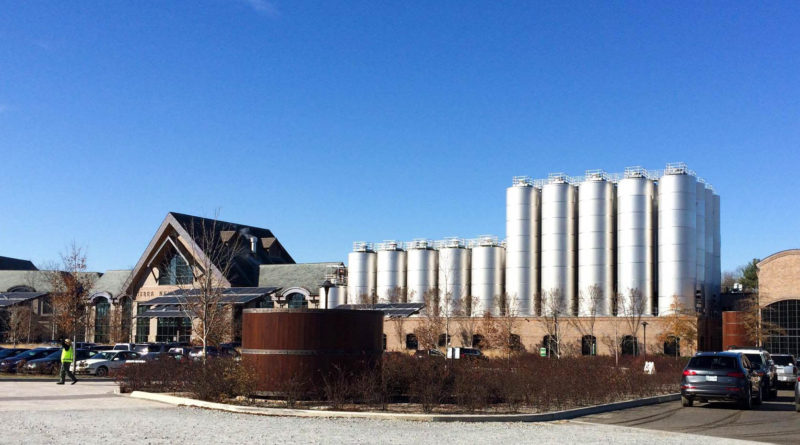 One of the best things about visiting breweries in Asheville is how close so many of them are together.  It’s possible to safely travel either on foot or via very cheap ridesharing between so many great places where beer is born.

On Saturday afternoon, however, we decided to take our adventure outside the microbrewery boom area of Asheville and visit two of the big boys of brewing located in Asheville: Highland and Sierra Nevada.

To begin our adventure, we piled into a single car piloted by our delightful designated driver and made off to the new, east-coast facility of one of oldest American craft breweries and the progenitor of the American Pale Ale: Sierra Nevada.

Built to impress.  That’s exactly how I would describe the SN brewery.  From the second you drive up, you start saying, “wow, look at that.”  And you don’t stop until your DD carts you out the door.

When we arrived, around lunch time on a Saturday, the place was slammed.  They have a large restaurant downstairs, west-coast style, so it’s not just a place for beer nerds to visit!  But no worries – they have pagers that work throughout the facility to buzz you when your table is ready, and a very self-guided tourable facility.  (We learned that if you want to get in on one of the guided tours, you need to schedule in advance.  If you’re headed that way, I suggest you book it now!)

We started by grabbing a pint and wandering upstairs to the “high-gravity” bar.  No pictures for this one, but upstairs has a smaller bar and large event space (currently occupied by cornhole when we were there, nice), along with a great balcony and outside (seasonal) seating.

When our table was ready, I was too hungry to take any pictures of our food, but let’s just say

All in all, the Sierra Nevada facility at Mills River is grand. In every sense of the word.  A truly amazing place to visit.  Also, if you go to the gift shop, get their mustard sampler, all made with Sierra Nevada beers.  Seriously.  Get it.  You won’t be disappointed.

The Patriarch of Asheville Brewing

Highland Brewing Company is Asheville’s first brewery since the repeal of the 18th amendment.  Founded in 1994, Highland is the granddad of the beer scene in Asheville.

Upon entering, the space and the atmosphere inside contrasted sharply with our earlier stop at Sierra Nevada.  Highlands taproom is mellow.  Relaxed.  Plenty of space.  Slightly busy, but comfortable.  You don’t need a reservation to take the tour.  In fact, we arrived minutes before the next tour and were able to join right in.

Nothing here is built solely to impress (except the beer); this is a working brewery.  Function supersedes form.  Heck, they have a couple cargo containers set up as office space in the back of the taproom.

And they have space.  I was struck by the room to grow of their facility.  And I hope they do grow.  They’ve been making some changes to their line-up lately, and from what I sampled in the tasting room, I think things are looking better than ever!

An Expedition of Differences

Ultimately, visiting both of these big breweries on the same day couldn’t help but invite comparison.  Sierra Nevada is a truly impressive operation, with food, excitement (crowds), and a great selection of beers.  But it also feels like a west-coast transplant – which I’m not saying is a good or bad thing, and in my opinion it’s certainly welcome.

Highland, while 14 years younger, is the oldest brewery in Asheville.  It has a more Appalachian-industrial atmosphere.  It certainly feels local, and it should since it’s been part of the growing Asheville culture for 22 years.

From my perspective, I would definitely want to go to Sierra Nevada’s facility at least once, but if I were in Asheville for any extended period of time, I would probably make Highland a repeat visit place.

Their proximity is a great opportunity for beer fans to visit them both and sample the roots of the local scene and a great California visitor.  So I’m saying, visit them both!